Our ‘Shadows’ are those aspects of ourselves, our behaviours and feelings that we have learned should not be, must not express or shouldn’t have in everyday life.  They become the part of the Self that Carl G. Jung termed ‘the Shadow’ and one definition is “those parts of ourselves that we hide, suppress and deny either consciously or unconsciously” These parts may be ‘negative’ parts or ‘positive’ parts (often referred to as ‘golden’ shadows).  And quite unconsciously, we can spend so much time just keeping those things at bay that we don’t have enough energy left to live the way we want.

And the core of every shadow contains a nugget of power and strength.  Your shadows are like a gold mine of buried treasure, filled with forgotten creative, useful energy.

Remember how, as a very small child, you were able to let all your emotions out without holding anything back.  And can you also remember how young you were when you began to learn that such uninhibited displays were wrong or unwelcome in some way?

As you grew up it is likely that people around you – parents, teachers, siblings and friends – taught you which behaviours were acceptable in this culture and, even more strongly, which ones were not.  Unrepressed displays of big emotions such as anger, fear, grief and even joy, may have been frowned upon.  Were you ever shamed for crying, punished for being angry, ridiculed for being frightened, or belittled for being proud of yourself?

Maybe you were very young when you began to feel the deep hurt of these things and learned that the best way to protect yourself from such wounding was to hold your feelings back.

What you did then, most probably, to get rid of the unacceptable parts of yourself, is graphically described by the poet Robert Bly in his ‘Little Book of the Human Shadow’.  Bly suggests all of us throw these parts over our shoulder and out of sight, into a metaphorical bag which we’ve been dragging round behind us ever since.

All of us have issues in the bag which slow us down in some area of our life.  Some of us can barely move because we have so much in the bag!  In that bag is everything that you think you can’t be or shouldn’t have or can’t express in everyday life.  It’s become the part of the Self that Carl G. Jung termed ‘the Shadow’.

One way to spot a shadow is to look for things you find yourself doing by accident.  No matter how hard you try to keep your bag sealed, your shadows may leak out in a way that seems beyond your control.  For example, you may promise yourself that you’re going to spend more time with your family, when you actually spend more time at work.  You may find yourself jumping into a questionable relationship when you know that this person isn’t right for you.  You may ignore your own rules about eating, smoking or drinking.  When you repeat a pattern of behaviour involuntarily, it is a sign that your shadow is running the show.

You can also identify your shadows by looking at what you project onto others.  In the twelve-step recovery programs they say: “If you spot it, you got it.”  This means that you are most aware of those traits in others which reflect your own shadows.  You may react irrationally to one of these traits in someone else, becoming unduly annoyed and blowing things out of proportion.

You might note the traits which you admire the most in others.  Who do you look up to?  Who are your idols?  We often project our ‘golden’ shadows onto others and get stars in our eyes because these people represent the qualities we have disavowed in ourselves, perhaps out of a false sense of modesty.  You could say that we paint other people with our shadows for better or for worse. 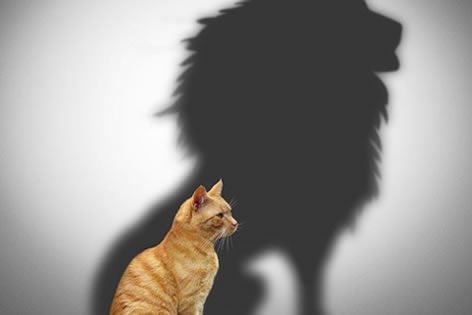